For gamers, the app allows them to find esports teams, communities, events, and allows for text and voice communication.

For event coordinators, it allows them to create events, manage financials, and communicate with event teams and vendors.

I worked on this as a solo designer for my capstone project in my Master of Science in User-Centered Design program at Brandeis University.

This was the breakdown of the work to complete the project:

Esports is a flourishing yet young industry. Projections estimate that it will generate 1.8 billion dollars in 2022, [1] with individual players earning million dollar purses from single tournaments alone. [2]

With this comes a surprising lack of an all-in-one solution for esports players to find other players, teams, events, communities, and for esports event hosts to manage, and promote events. While some products have tried to manage some of these needs, like Steam and Discord, none have covered all of these needs successfully. [3] [4]

To start the process of creating this technology, I first determined if there was a need for something like this, and if the initial design functions would actually be solving any needs.

This initial research was a multifaceted approach, where I surveyed 25 participants in the target populations (gamers, esport fans, people who worked in the gaming event industry) to understand things like their current needs and problem areas when interacting with technology, and how they current use technology in conjunction with esports. I also conducted long form, open-ended interviews with both gamers and event coordinators. 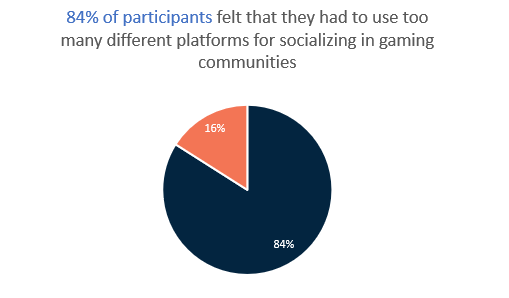 - All surveyed gamers liked to use technology to aid them with friend and team interactions (like searching for others and communicating), but 84% reported that they felt they had to use too many different platforms 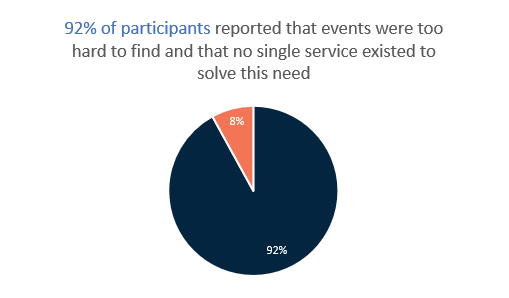 - Of Esports fans and gamers who attend in-person events, 92% polled said that events were too hard to find and they reported that there wasn't a single service that solved this need
‍
- Esports Industry personnel (Event Coordinators) that were polled reported that technology was often a barrier to getting event information directly to gamers / fans / spectators / esports teams and brands
‍
After the generative phase of research was completed, I created a project proposal to share with my peers. You can check out the proposal document here.


Common quotes from Esports Players and ways to ensure success:

1. “I would not play with someone else if they are not serious about the game, and have a difference in skill level” → early designs incorporate player profiles that will include all of these variables.

2. “I don’t like having too many different apps or clients to use to communicate with my gaming friends.” → designs will focus on covering a wide amount of needs and compartmentalize within one app

3. “I’m not sure of a consistent way to search for LAN events.”, “There’s not an aggregate site or anything, it’s definitely not easy.”→ designs will make the LAN event search a predominant feature and focus on simplicity for the user

4. “It would be handy to move between functions quickly, like team searching to chatting to event browsing.” → designs will emphasize primary navigation and not go too deep in screens to get to basic functions. that way users don't have to waste too much time going through a branching web of screens

Common quotes from Event Coordinators and ways to ensure success:

1.  “Frequently we have had issues with walk-up ticket buyers and people not buying tickets ahead of time, as this can change the outlook and the logistics of an event.” “Selling tickets inside of the app would be great.”→ designs can implement ticket purchasing inside of event pages, and this can be a highlighted CTA.

2. “We use too many ways to communicate; Slack, Whatsapp, email, text, phone calls…”→ designs will include a myriad of communication channels, including teams like event management, vendors, promoters, and brands, and allowing for voice and text chat channels

3. “Our shared gmail calendars are very important. We would need an app that can sync with that.” “Organization with our calendars is the glue that keeps the industry together and running right. LAN’s would never happen without organization”→ designs will place an emphasis on connectivity with outside-app calendars

After analyzing the initial research results, I moved on to creating design aids, or artifacts. They allowed me to get in the heads of our target populations, to visualize experiences without committing to design choices, and they are valuable, tangible references to return to at any point in the design process. 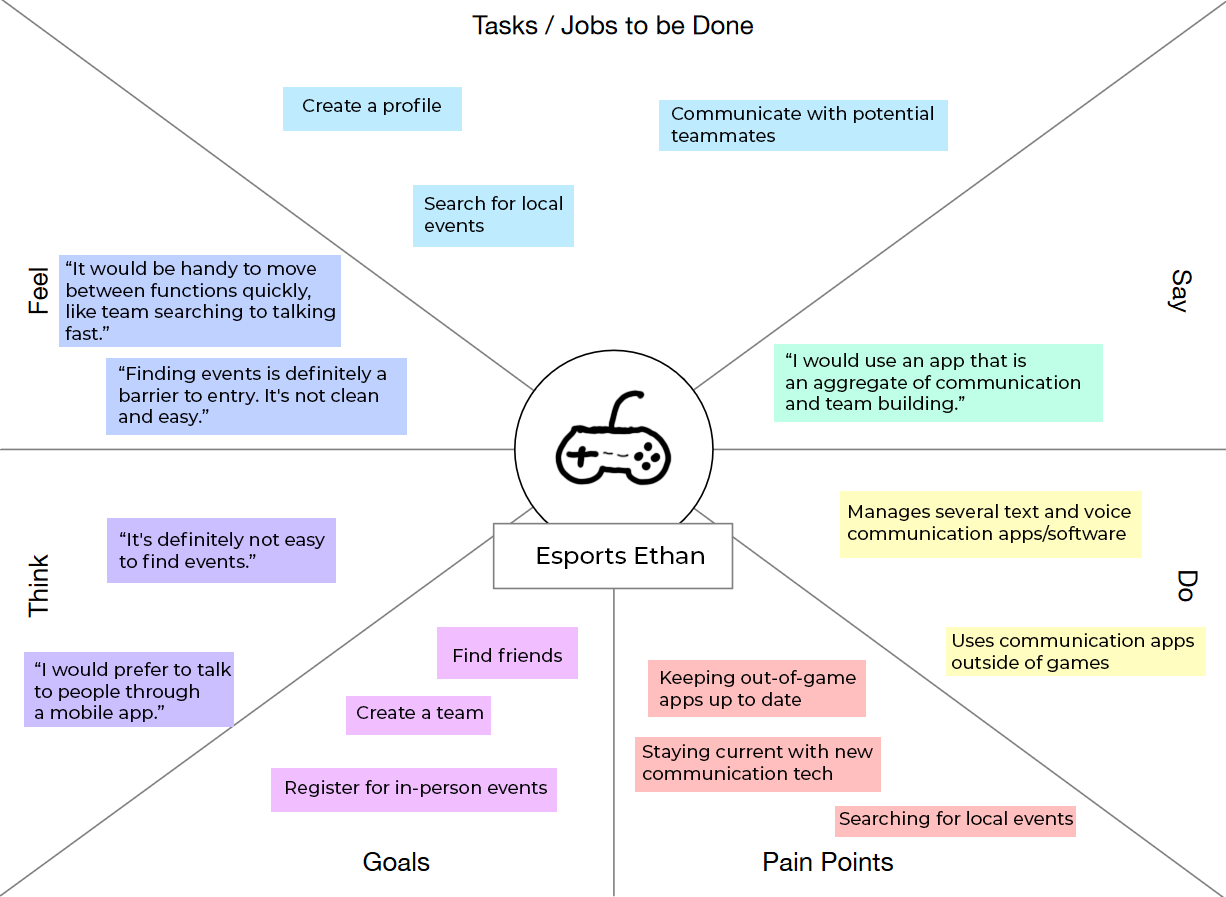 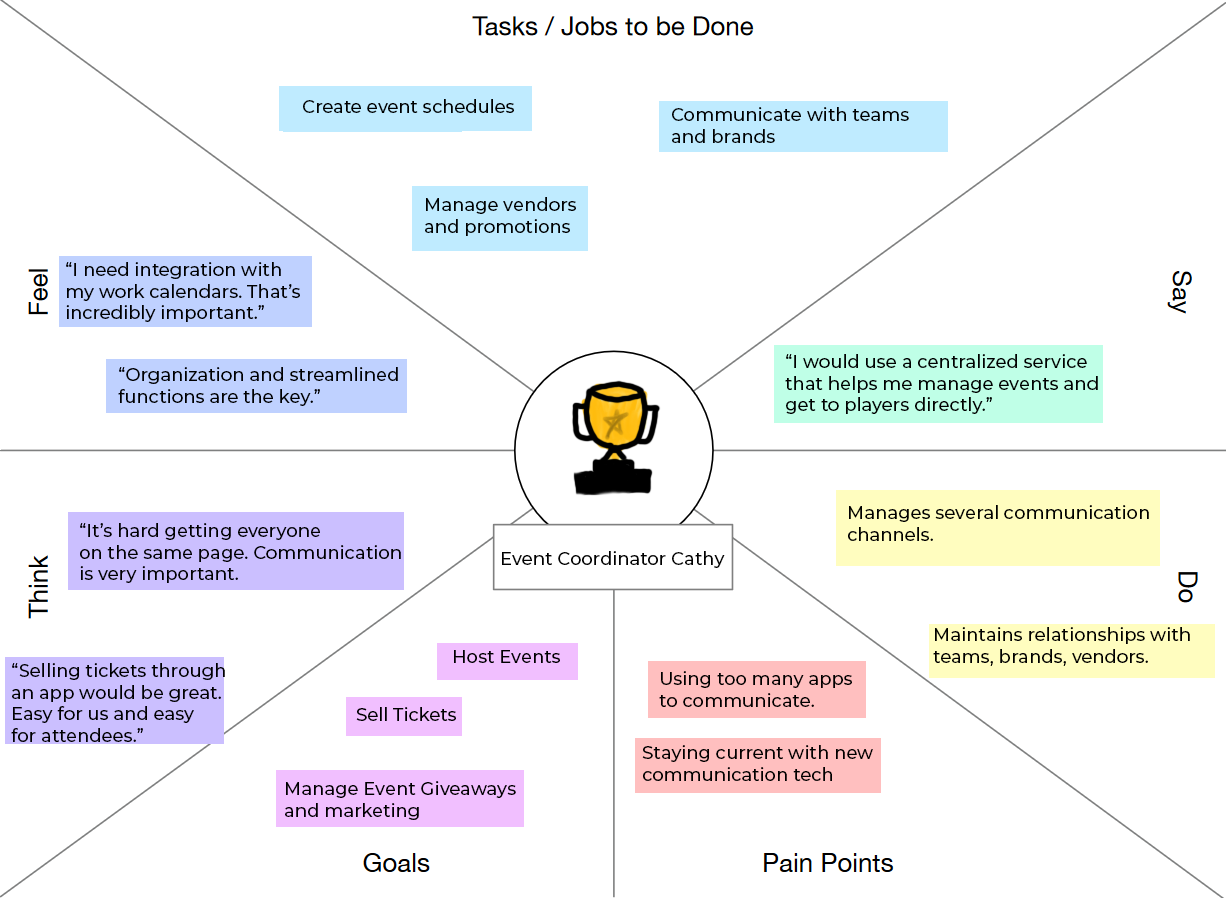 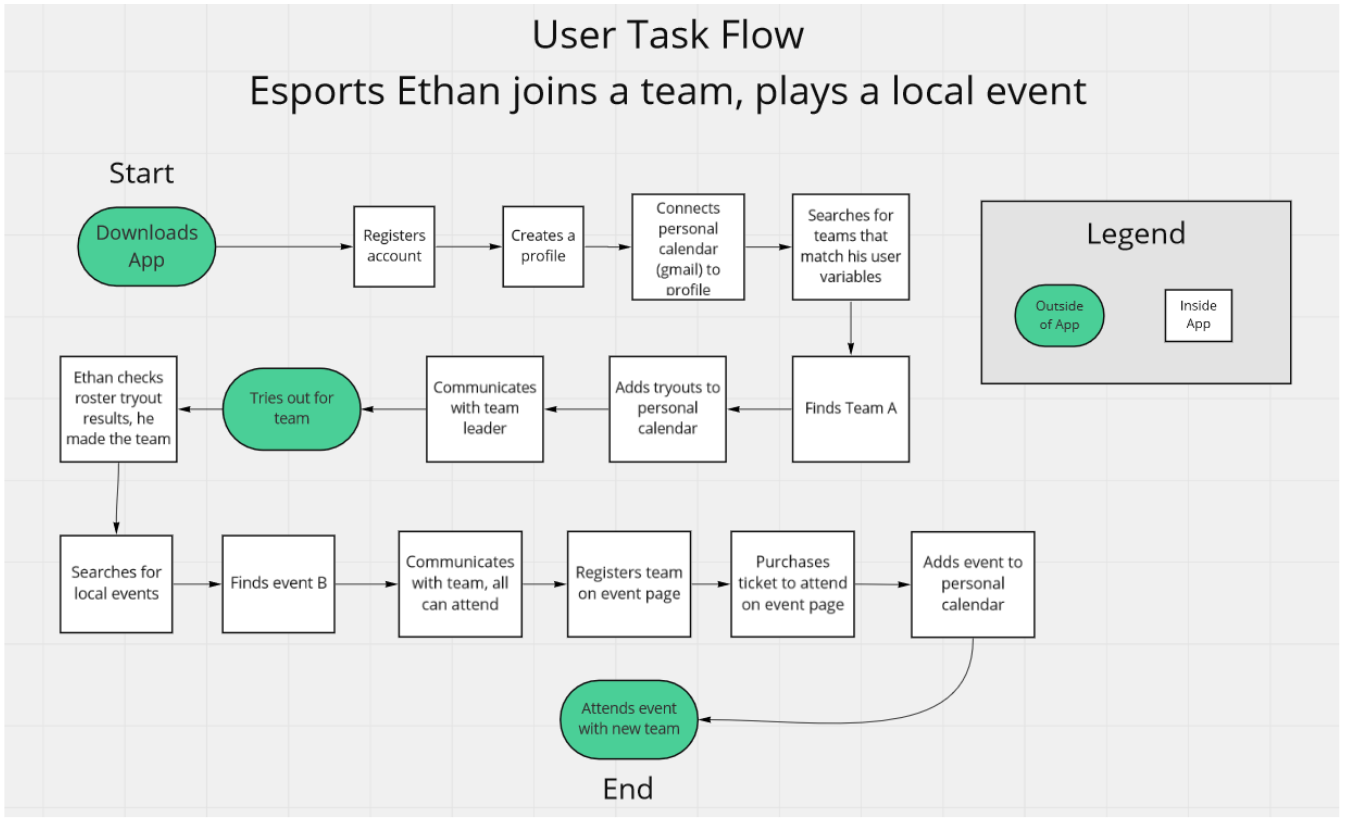 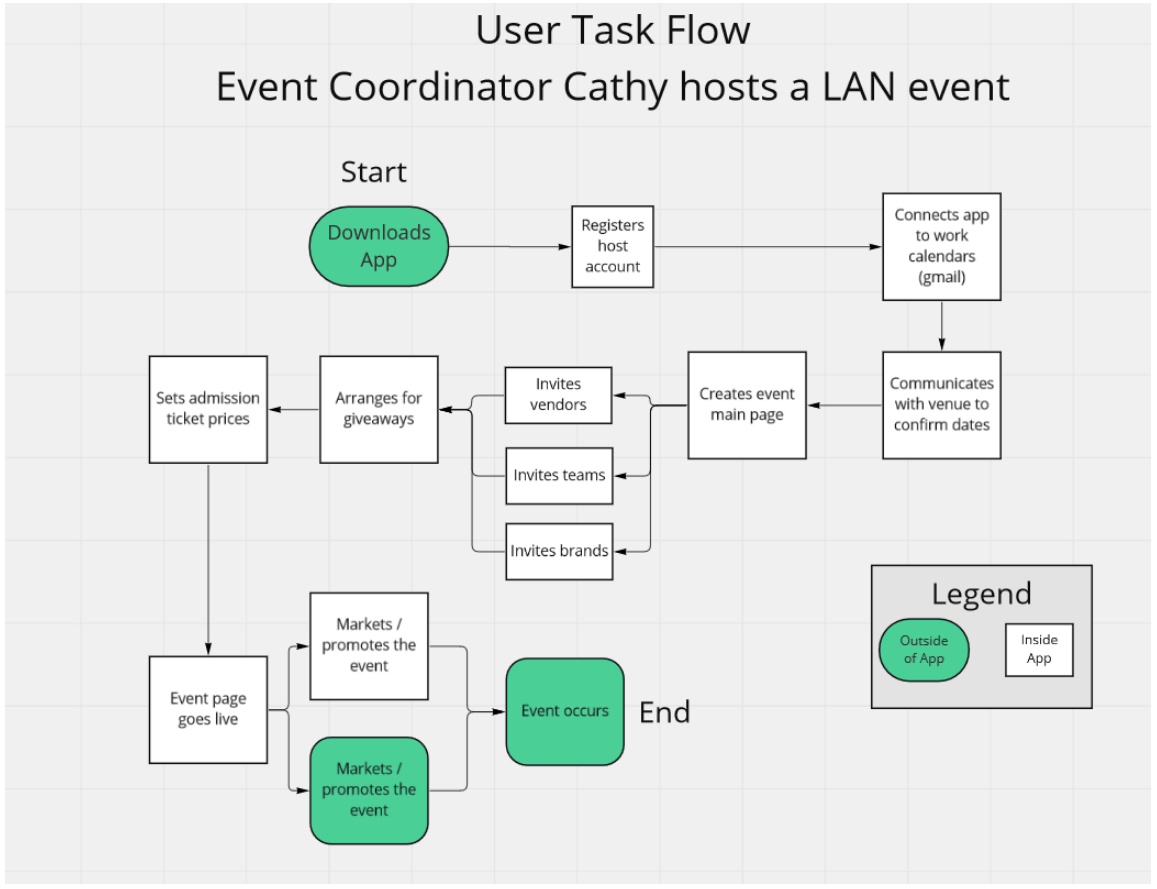 Design Concept
‍
Next I created a Design Concept. This is a document that visualizes a user interacting with a design in a basic manner, with flows and tasks further shown to simulate the experience without having to commit to wireframe designs.

User Insights focused on while creating the design concept:
‍
🧑🏻🤝🧑🏾Variables like demographics, schedule, skill level, seriousness of play, and location are important for players when searching for other players, teams, and communities.
‍
💬Text & Voice chat are important. Users want both channels

Now, with a substantial amount of feedback gleaned from initial research, and design aids at hand, I began to create low fidelity wireframes with the following basic goals in mind:

Testing
‍
Before moving forward with designing more of the experience, I wanted to run a few short usability tests to ensure my trajectory was on a user-centered path. I tested two participants who were gamers that had interest in Esports and tasked them with going through the process of finding a team using the app.

Both participants were successful, and both reported that they clearly understood the primary navigation; thus validating this initial iteration of designs. 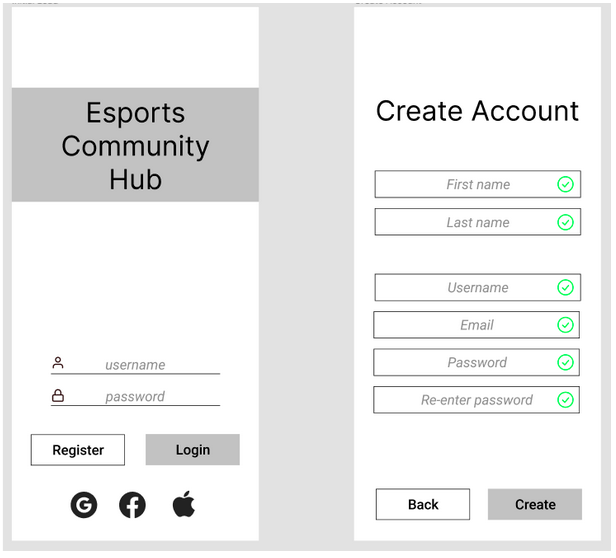 Another round of usability testing was conducted to ensure that the addition of this new onboarding section did not hinder the process of a gamer finding a team.
‍
- Four gamers were tested and completed the task successfully, reporting that the process was intuitive
- Suggestions were made by the gamers to highlight two elements to be iterated on
‍

The goals for this iteration were the following:
- Expand on the designs and more features, like "Find an Event", "Create A Team", Calendar, and Settings areas
- Incorporate user suggestions from previous round of testing. 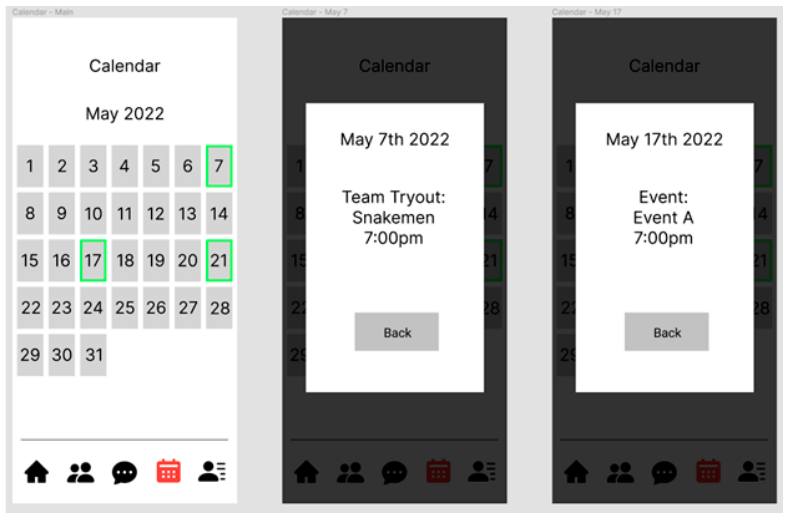 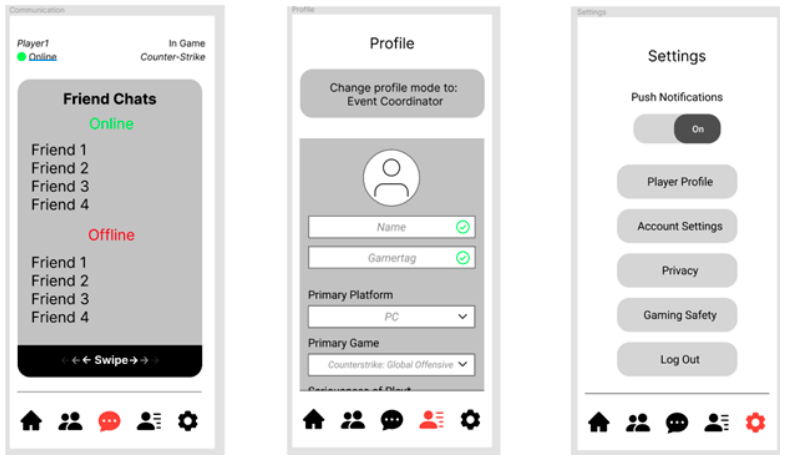 Here more of the experience was designed, along with suggestions iterated upon from the user testing. The users reported that the "you are here" navigation icon highlights afforded them the opportunity now to understand where they were in the app, along with contrast highlights created in the "swipe" elements to better display the interactions to users.

The focus of this iteration was to create a process for Event Coordinators to utilize the technology. 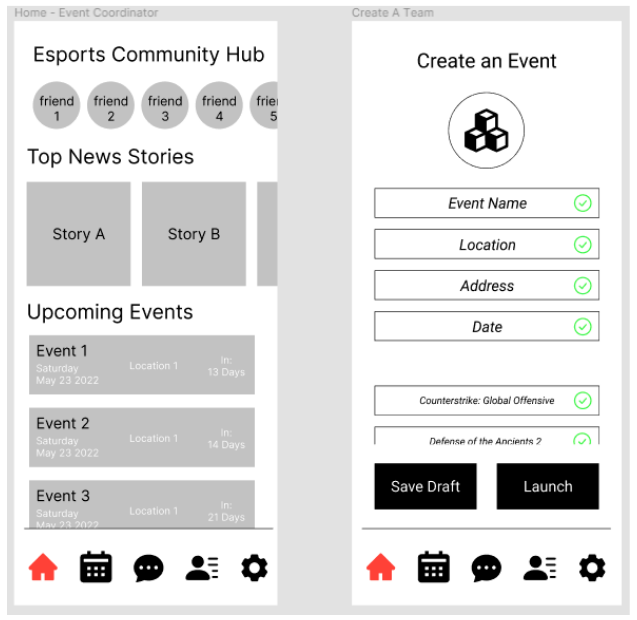 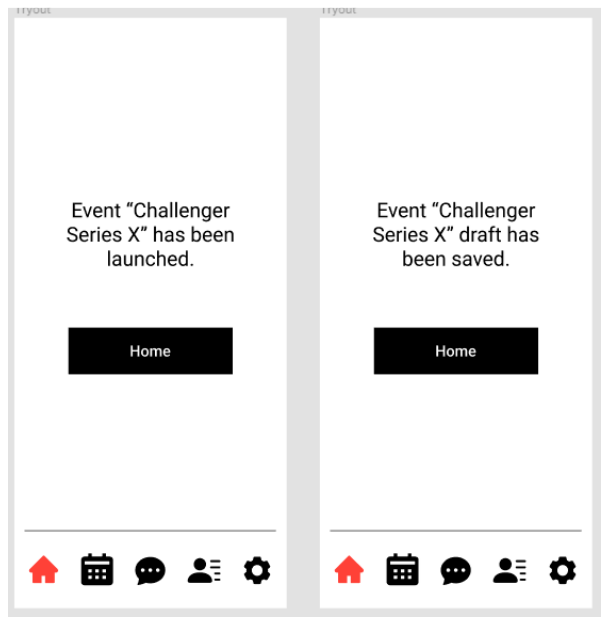 In this fourth and final round of usability testing, the following insights were uncovered from both gamers and event coordinators:

- Users felt that finding when finding a team, there should be an opportunity for an initial communication to start between the player and the team leader, and not only the adding-event-to-calendar option.

- Events and Team Tryouts / Practices on the calendar could be easier to read if they were color coordinated; if there were many events for a gamer in one month it could be confusing to quickly glance and delineate them from each other.

- Chat page iterated, participants wanted a vertical scroll instead of the horizontal card scroll – they found it too similar to the find-a-team and find-an-event functions

- Initial loading screen could have a “What is Esports Community Hub?” element that simply explains the app before any registration occurs.

The objective of this final iteration was to solve the remaining user needs, and triangulate all improvements, suggestions, and ideas into one final version.

-Users also wanted a way to open a communication with the leader of the team they want to try out for, alongside with adding tryout dates to their calendar

-The chat page was also iterated, as users felt more comfortable with a familiar vertical scroll 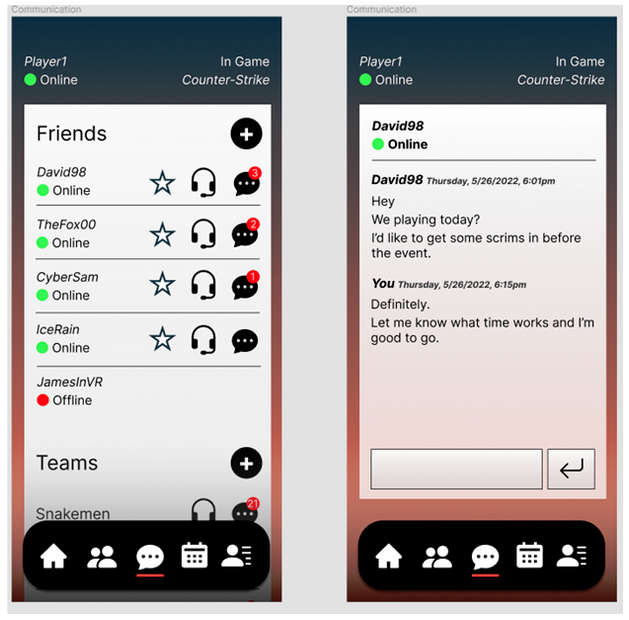 - The home screens are iterated 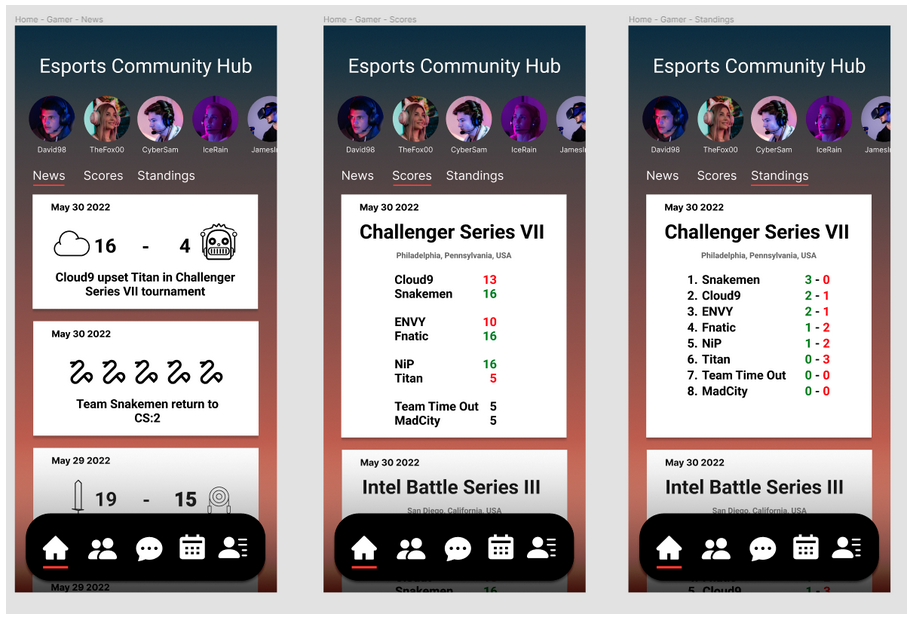 -The Event Coordinator screens were improved, with unnecessary elements removed thanks to user feedback 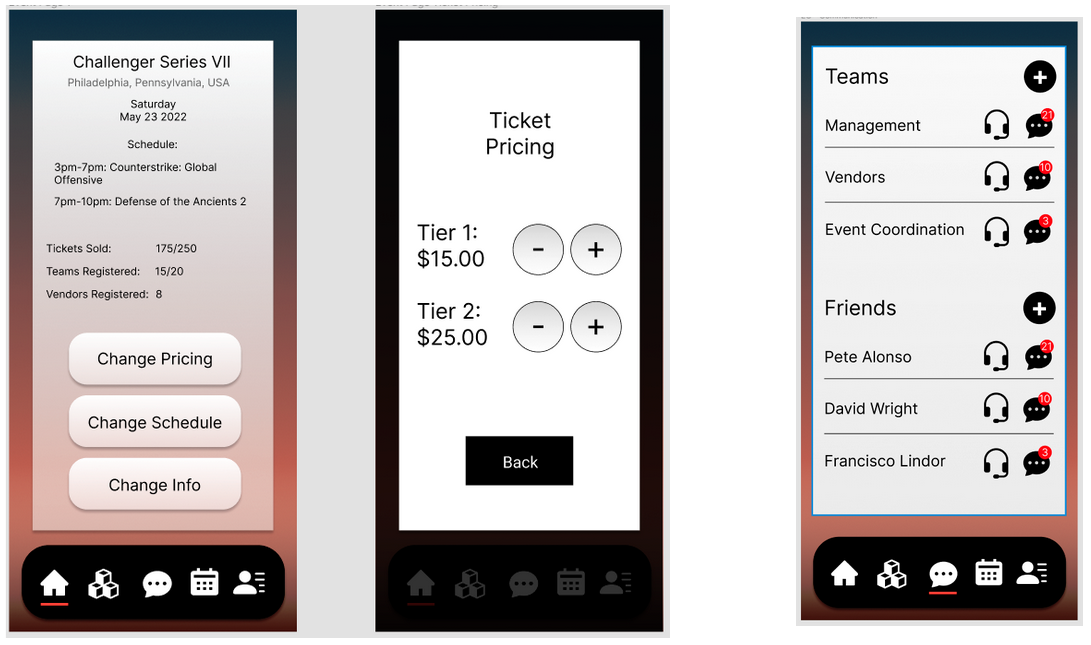 This was incredibly fruitful for me in seeing a project through from initial ideas all the way to a final, high fidelity solution.

Staying grounded with user check-ins highlighted the importance of user-centered design and allowed my work to continue on a path that was in tune with user needs, and also let me ideate and design without having to backtrack too often. This user-centered work was essentially "measuring twice and cutting once".

To continue the project, I would look towards testing larger populations, creating a synchronous web solution, and exploring integrations with the actual games. I imagine that the experience could be improved with more insights from larger populations that could look at new features and systems that weren't initially uncovered in this ten week time period.